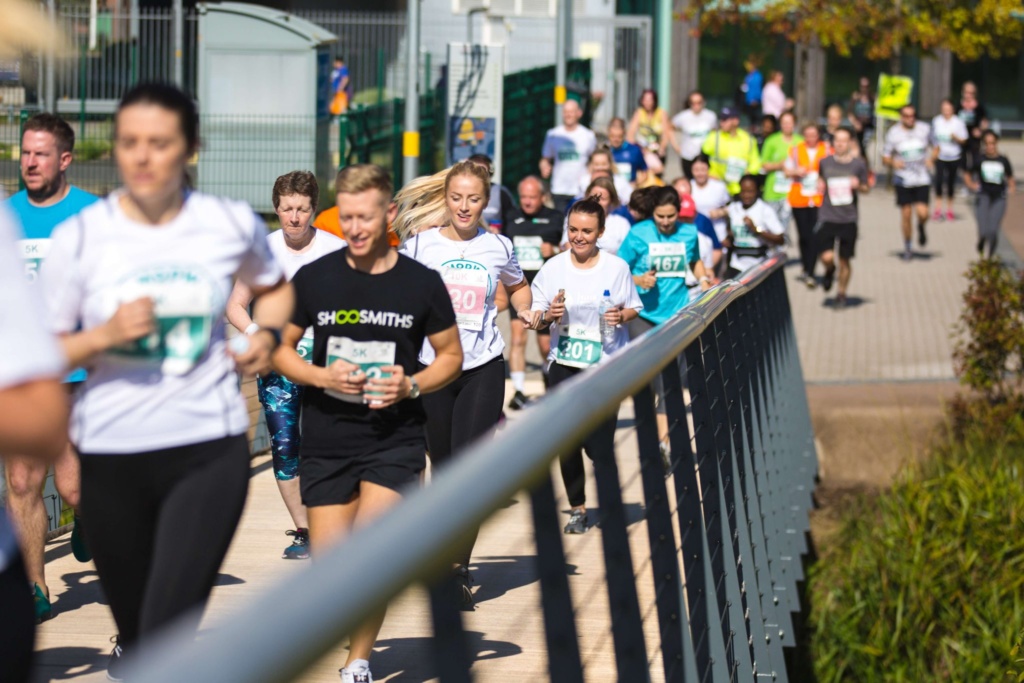 Over 250 professionals from across the Midlands took part in the St. Modwen Charity 10K and 5K races on Friday 13 September, raising over £26,000 for LandAid, the property industry charity working to end youth homelessness.

Pounding the pavements of Longbridge and Cofton Park, runners from leading property and professional services organisations including Avison Young, WSP and Atkins, took on the rolling hills and rough terrain in a bid to raise vital funds to help young people locally affected by homelessness.

Deemed one of the Midlands’ toughest 10k and 5k routes, competition was rife as runners crossed the line in record times. In the 10K race, the title of Fastest Male Under 45 was taken by Mark Ince of WSP UK with a time of 00:36:32, whilst Kate Green of Avison Young won Fastest Female Under 45 with a time of 00:41:58.

The Fastest Male Veteran category was won by Michael Smith of Pinsent Masons, who raced to the 10K finish in just 00:45:05, whilst Ann Chance of St Francis Group took Fastest Veteran Female for the second year running in 00:53:34.

Environmental consultancy, e3p, was crowned the day’s Fastest Team and received the award for Highest Company Sponsorship for its fundraising efforts.

Now in its third year, the St. Modwen Charity Run has seen over 650 runners take to the pavements of Longbridge to raise over £75,000 for LandAid. Through its partnership with Birmingham-based charity, St. Basil’s, money raised has been used to renovate homes to provide safe, secure and affordable accommodation for young people at risk of homelessness in the Midlands.

“It was an honour for St. Modwen to both organise and sponsor this year’s Midlands run for LandAid and welcome so many leading organisations to our home in Longbridge. The work that LandAid does to support young people locally reinforces our mission to make a positive impact in our communities and brings to life our purpose of changing places and creating better futures.

“We are incredibly grateful to everybody that took part, fundraised, sponsored and volunteered for helping to raise over £26,000 for the charity and for putting on such a well-received event.”

“It was great to see so many runners in the Midlands racing to end youth homelessness for the third year running. A huge thanks to all of St. Modwen and all of the runners – the money raised will make a real difference to the lives of young homeless people in the region, giving them the support and tools they need to create bright futures. Thank you.”

To view all of the photographs from the run and to donate, visit www.stmodwen.co.uk/charityrun and to find out more about LandAid, visit www.landaid.org