The Role of Culture and Community in Placemaking 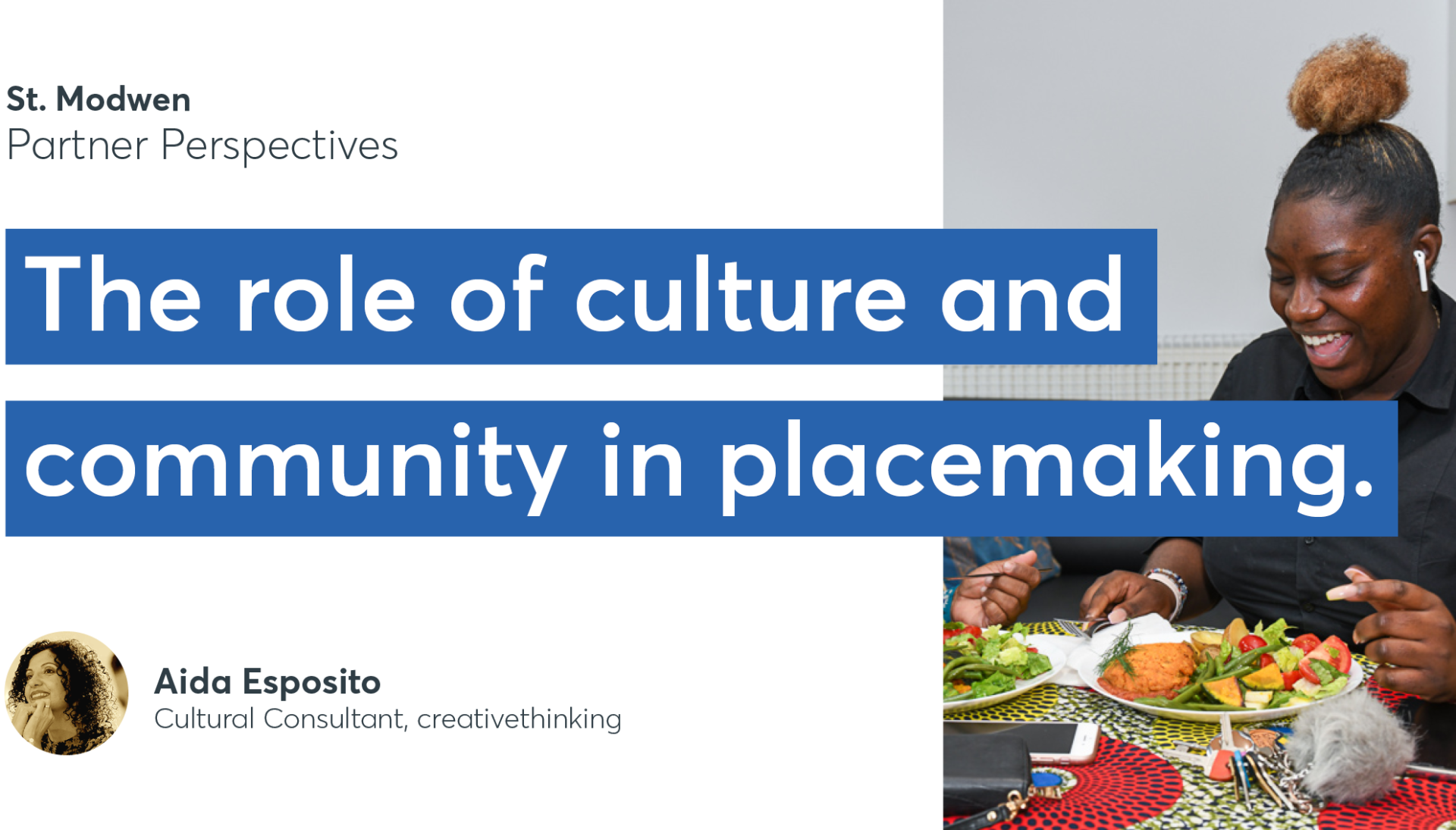 In our final partner perspective story, cultural consultant Aida Esposito explains the importance of art, creativity, and community engagement in building spaces that are able to change and grow.

Buildings don’t exist in a vacuum; every place comes with its own history, its own surrounding environment, and most importantly, the people who live there. Creating a place that is fit-for-purpose means consulting with those people to make sure they don’t end up being shut out of their own neighbourhood as it evolves.

“Developers think ‘we’ll just build something, then people will come and use it.’ But actually, by involving people in the development of that place, you build in ownership and permission for people to come back,” explains Esposito, citing several initiatives that were undertaken at the New Covent Garden Market project in Battersea.

One of the boundary walls of the site was a dark, physically oppressive element of the surrounding area that residents really didn’t like. “Once we identified that as an issue, one of our first cultural programmes was to transform that wall into a much more colourful, joyous space,” she says. Esposito, St. Modwen and Vinci brought in landscape collective Edible Bus Stop and street artist Mr Dane to work with local schoolchildren, planted flowerbeds, and installed seating, because part of that wall overlooked a primary school and there was nowhere for parents to gather while waiting to collect their children.

“Those mini gardens are now maintained by a community group,” she says. “You can’t buy that level of ownership from community members, and you bring that out through engagement and listening to what they actually want… Regeneration schemes can be 15, 20 years long, and it’s really easy to think ‘this will happen in 2025,’ but what about the people living there today?”

“Buildings don’t exist in a vacuum; every place comes with its own history, its own surrounding environment, and most importantly, the people who live there.”

Another programme to engender buy-in from the local community was the Bonnington Café on Thessaly, a pop-up created to ensure that many local schoolchildren living in food poverty were able to access readily available cooked meals during the summer months. Initially created as an affordable alternative to the expensive local cafes and restaurants where locals might never go, the café soon took on a life of its own. “We had people asking if they could run art classes, yoga classes, dance classes, and we just kept saying yes, and it became an incredible hub of community activity that was generated by what they wanted to do, on their terms, at a price point that was accessible to them,” says Esposito. “A project like that ostensibly has nothing to do with a developer, but actually it has a lot to do with changing places, changing lives.”

Esposito believes that there is a “moral imperative” for developers to respect what came before them, especially in cities like London which are constantly being rebuilt and renewed, and to appreciate that communities existed there before the shiny new flats or office block.

“Be cognisant of the disruption you cause, and also of the value you can bring to that community, whether that be eating in local establishments, offering apprenticeships, or helping local schools,” she says. “There are multiple things you can do as a large business which actually don’t cost a lot, but have an incredible impact, and a much longer legacy than you might realise. And if you do those things well, that community may actually be your future customer base.”

“There are multiple things you can do as a large business which actually don’t cost a lot, but have an incredible impact, and a much longer legacy than you might realise.”

Of course, it’s impossible to discuss the future of communities without also acknowledging the effect the pandemic has had on our society, and Esposito anticipates that it will influence developers’ cultural strategy in several ways moving forward, simply by highlighting issues which have always been there.

“The pandemic has crystallised how precarious that dotted line is from being able to afford to feed your family and not being able to,” she says. “The food and hospitality industries been decimated by the pandemic, businesses that were ethical and robust suddenly found themselves unable to pay next month’s rent, and I think we’re going to see more of this in the months to come.”

Building equitable, affordable access to food into neighbourhoods will be crucial moving forward. Esposito envisions a potential pivot towards the “15-minute city” model, where residents can get anything they need within a 15-minute walk of their home, as well as an availability of smaller offices and pockets of accessible public outdoor space; what she calls a “micro-ecology” that will enable people, businesses and communities to thrive.

“I think developers do have obligations, but I also think it makes good business sense,” she says. “If you were to move home, you’d want a place that is vibrant, with parkland nearby, with a local café where they remember your order, somewhere you’re able to buy fresh bread, and weekend activities for your kids. Those subtleties are at the periphery of what a development scheme is about, but it’s these softer elements that push your emotional buttons and make you more responsive to a space, which means you might buy there.”